Posted on September 7, 2017 by calgarygayhistory | 2 comments

Calgary Pride 2017 was very energizing for us at the Calgary Gay History Project. Our history walks and the festival booth were well-attended, and we received a lot of positive comments about the project.

It is important that we honour community trailblazers and in 2017 we certainly did. Lois Szabo was a stunning Parade Grand Marshal in her purple tights. She was also delightful in her many media interviews.

The YYC Legacy Project harvested lots of community feedback on what a LGBTQ2S+ history commemoration could be. They had an impressive display at Pride in the Park as well as a great interactive map of Calgary.

A very special thank you to Ayanna and Gordon who helped volunteer at the Calgary Gay History Booth. We would also like to thank project donors and all of those who came out to speak to us and were enthusiastic about our work. Finally, a big shout out to Gary Evans, a professional photographer who came to both gay history walks, documenting them, and then sending the photos to us.

Consequently, here is a photo summary of our week: 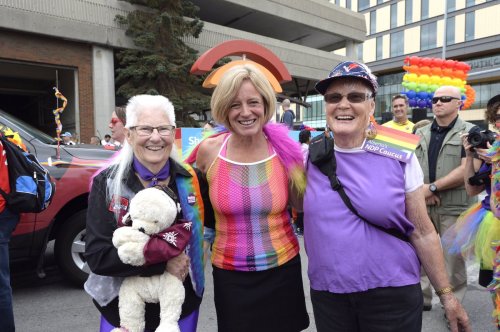 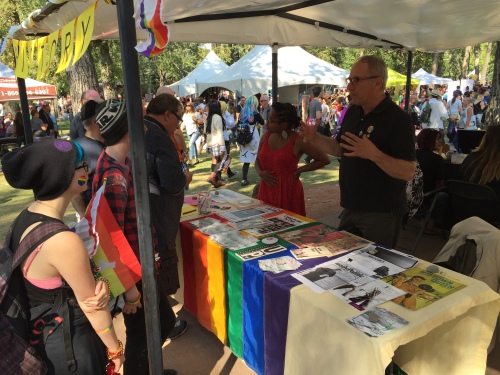 Ayanna and Gordon sharing history at Pride in the Park. Photo: Kevin Allen. 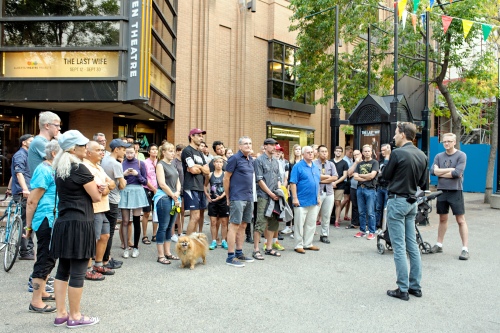 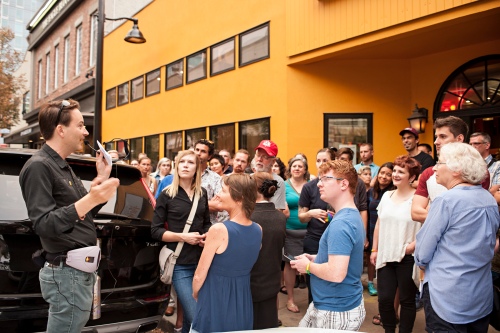 Lois is a Calgary superhero!

Congratulations to Lois Szabo, selected as this year’s Calgary Pride Parade Grand Marshall.  We, at the Calgary Gay History Project, think Lois is a truly deserving ambassador. If you have not seen it, check out this lovely profile of Lois composed by CBC journalist Terri Trembath. 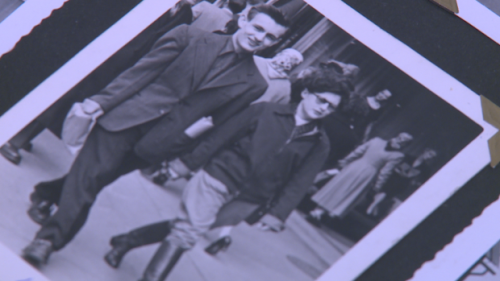 Lois was born in March 1936 and married her husband Les at the age of 18. They had two children before Lois realized her true sexual orientation. She came out as gay in the early 60s and renegotiated the terms of her marriage with Les in order to live together and raise their children.

Lois found Calgary’s larger lesbian community in the 60s at the Cecil Hotel, where there was a separate drinking room for women that gay women occupied.  Finding great comfort and joy in discovering her community, Lois became one of the founders of Club Carousel, Calgary’s first community owned and run, private members club.  The Club was incorporated in 1970, as the Scarth Street Society; there were approximately 600 members by 1972. Weekend attendance could top 350 revelers in the small underground venue – no straights allowed.

Lois at Club Carousel in 1972 with a little pomp!

Club Carousel was the first legal gay & lesbian club in Alberta and Lois was a key volunteer and board member for most of the Club’s history.  Using the Calgary club as a model, Edmonton, Saskatoon, Winnipeg and Regina established similar societies.  Club Carousel also sponsored prairie regional gay conferences from 1970 to 1976.

Since then, Lois has spent a lifetime volunteering and organizing in Calgary’s LGBTQ community.  She currently volunteers for the Kerby Centre’s Lesbian Seniors Group, One Voice Chorus, and Calgary’s LGBTQ2S+ Legacy Committee.

Lois was recognized by the community in 2015 receiving the Chinook Hero Award given annually to deserving LGBTQ leaders by the Calgary Chinook Fund Endowment Committee.

Amusingly, we recently found this comic book cover, which would have hit Calgary newsstands around the time Club Carousel was being conceived.

Lois, we think you are Super too, just like this other Lois!

August 1968 DC Comic: “When Lois was more super than Superman.”

Tracking YYC Gay History in BC

This week Kevin is in Vancouver and Victoria with a long list of former Calgarians to interview. He is learning more details about the 620 Club, early Club Carousel days as well as the Gay Liberation Front in Calgary and the People’s Liberation Coalition. Thanks to Marlene, Doug, Jesse, Dawn, Russ, Brian, My, and Ruth for their great stories and long memories!

Also, the Calgary Gay History Project would like to give a shout out to Mount Royal University History Professor, Dr. Jarett Henderson, who paticipated with over 100 authors in a new book called: Any Other Way: How Toronto Got Queer. It looks great.

This map of “Gay Toronto” originally appeared in The Body Politic, a monthly gay magazine published from 1971 to 1987. Photograph courtesy of the Canadian Lesbian and Gay Archives

To see the full table of contents and to order online: click here.