Back at the University of Calgary archives this week, looking at old theses – the one’s that had to be manually typed with splotchy typewriters!  Gold was struck in finding Audrey Dwornik’s, Master of Social Work thesis titled: Self-help and Homsexuality (1970). 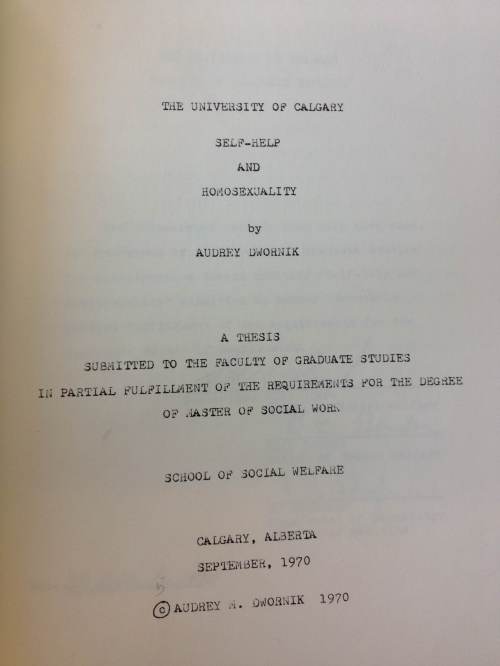 The premise of her paper is that groups of deviants because of societal pressures, seek each other out for support, acceptance and a sense of freedom.  Despite the language, Dwornik was largely sympathetic to the plight of homosexuals at the time; she used “deviant” in an academic sense, as in “deviating from the norm.”

As part of her research she looked into the history of homosexual friendship groups in Calgary.  She found the history of gay clubs in Calgary ran back to at least 1939.  She writes, “It was in this year that a homosexual was arrested and he told the police about a homosexual club he belonged to.  The name of the club was the Pansy Club.  The members of this club rented an apartment where no one lived, but where they had their parties in private away from the fears of being arrested.  The club mainly had a social function, but it also acted as a means of self-protection for its members while participating in homosexual relationships.”

There were Pansy Clubs in many North American cities, a caberet-style phenomenon that sprouted in New York and spread.  Who knew it had made it all of the way to Calgary, whose population in 1939 was 85,726!

Check out this link to Pansy Clubs of the 1920s and 1930s, featuring the song, “Masculine Women, Feminine Men” (1926) Fox-Trot, played by the Savoy Havana Band.

Sidebar:  Dworkin made some funny observations about homosexual friendship groups.  For example, she explains, “The type of homosexual know as the ‘queen’ is only present in overt groups.  Their role is to provide a place where the group may gather and where its members may have their ‘affairs.’  ‘She’ also helps finance members in distress, acts as intermediary in making sexual contacts, partially controls the entrance of new members by warning those already members of persons who may try to take advantage of them, such as persons who like to steal from homosexuals.”  Phew, what a job description for those 20th century queens – expectations must have been high…