Posted on October 11, 2018 by calgarygayhistory | 4 comments

We are over the moon. On September 30th, we learned that our film, Gross Indecency the Everett Klippert story won the Best Alberta Short award at the Calgary International Film Festival. Congratulations are due to the talented director, Laura O’Grady and Spotlight Productions for making this film.

Our film gets laurels at CIFF

The long-awaited book Kevin has been working on is almost complete. The content is done and it is in the design phase. Here is a sneak peak of the cover, a woodcut by the accomplished Calgary artist, Lisa Brawn. It is her take on the iconic Club Carousel logo.

Our Past Matters: Stories of Gay Calgary should be on sale November 21st – we are much looking forward to sharing it with you.

The Calgary Gay History Project is going to be subdued over the next four weeks. However, you can look forward to these Spring programming events.

We are partnering with the Calgary Underground Film Festival to present the WORLD PREMIERE of THE UNTOLD TALES OF ARMISTEAD MAUPIN. The film is about the celebrated author whose Tales of the City books were groundbreaking works of gay fiction. This series of nine books published between 1978 and 2014 mirrored developments in the gay rights movement across North America.

Sunday, May 7th, 10:30 AM @ Community Wise (The Old Y) 223 12 Ave. SW
Beltline Gay History Walk (part of Jane’s Walk Weekend)
Join the Calgary Gay History Project’s Matthew Gillespie on a walk through the Beltline. We will travel to significant historical gathering spots for the gay community in this inner city neighbourhood, including Calgary’s first gay bar, from 1968, Club Carousel. Everyone welcome.

Sunday, May 14th, 1:00 PM @ Knox United Church, 506 4 St SW
To celebrate Knox’s 10 year anniversary of being an affirming congregation in the United Church of Canada, the church is hosting a number events including a presentation on the history of the LGBTQ community and organized spirituality in Calgary. More details to come.

The Fairy Tales Queer Film Festival starts tonight at the Plaza Theatre.  It is one of my favourite times of the year!

In June 1999, this cultural institution began in Calgary, then called the Fairy Tales Gay and Lesbian Film Festival.  It opened for two nights in the Garry Theatre in Inglewood (no longer a theatre, but a live music venue).  There were sell out crowds as well as lots of excitement on those two sweltering summer evenings – in a venue with no air conditioning!  Movie goers, fanned themselves with programs, drank cool beverages and managed to sweat buckets with no complaints: a sort-of cinematic sauna experience…

Seeing ourselves represented on the big screen for sixteen years now has been nothing short of alchemy for me personally.  After a week of watching queer film (I am a pretty hard core festival goer), I am always disoriented to find the outside world as straight as it is.

However, it is the documentaries I have seen at Fairy Tales that have stayed with me the longest.  My short list includes:

Beyond Gay: The Politics of Pride (following Vancouver’s Pride Parade Director travel to other pride demonstrations around the world – including Russia – which spontaneously got a standing ovation in the cinema afterwards!)

United in Anger: The History of Act Up (a stunning look at how AIDS activists fighting under the highest stakes, changed the world).

Every year the programming team at Fairy Tales combs through hundreds of submissions, to select the festival’s annual line-up.  I am sure there are more memorable films to be seen this week at Festival #16 – check them out! 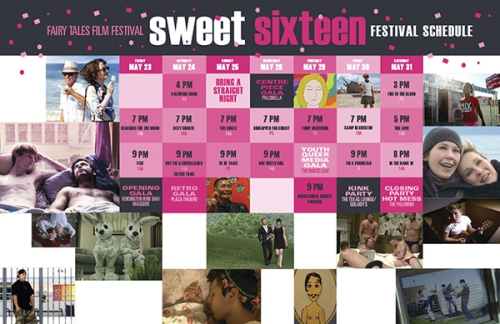