The catalyst for the formation of the Calgary Lesbian and Gay Political Action Guild (CLAGPAG) came out of an act of discrimination. In the Autumn of 1988, a group called Project Pride was arranging a special fundraising event to help send a Calgary contingent to the 1990 Gay Games in Vancouver. They had just completed Calgary’s first Pride Festival that June and were on a roll.

The event was to be a banquet at a downtown hotel with high profile Member of Parliament Svend Robinson as the keynote speaker. Robinson had recently come out as gay, which was a precedent setting first for a Canadian MP.

The Delta Bow Valley Hotel happily entered into a contract with Project Pride to rent their hall and provide a banquet dinner for 70 people. In February 1989, Project Pride’s Co-Executive Director Cheryl Shepherd went into the hotel to make the final arrangements and informed the hotel about her organization’s constituency: lesbians and gays. She was then told that there had been a “misunderstanding” and that the Delta was not prepared to rent to such a group. 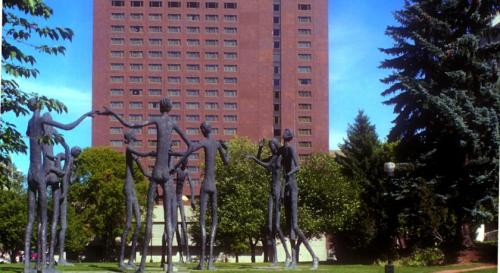 Sexual orientation was not a protected ground under the Alberta Human Rights Act then, so the Delta’s decision was completely legal. The rejection prompted outrage among a couple of movers and shakers in the gay community. Dr. Ruth Simkin, an outspoken physician often labelled a lesbian feminist in the media, and John Steen, a gay man who was a Liberal Party Organizer, aimed to tackle the injustice.

Both Ruth and John were members of Calgarians Networking Discretely (later the Calgary Networking Club, an organization for gay and lesbian professionals), which was a partner to Project Pride in organizing the banquet. As neither Project Pride nor Calgarians Networking Discretely had any appetite to be political, Ruth and John thought an organizational name behind their protest would be advantageous: a working title of Calgary Lesbian and Gay Political Action Guild was created.

They sent protest letters to the Calgary press, the Delta Hotel’s head office in Toronto, federal MPs, the provincial and federal human rights commissions and the provincial Labor Minister Rick Orman, who was responsible for human rights. They got an immediate response and a flurry of excited local and national media coverage.

The president of Delta Hotels, Daniel Oberlander, called Ruth from Toronto to apologize personally and sent a complimentary bottle of wine. Local Delta general manager, Tom Matthews, was on the record calling the incident a misunderstanding. He said, “If we offended this group or any other group, that was not our intention and we apologize.” The Delta then made a cash donation to CLAGPAG, which turned out to be seed money for the organization.

The Palliser Hotel stepped into the breach and offered to host the banquet, which they did, and as the controversy died down, CLAGPAG became an official entity, with a 15-person steering committee by May, 1989. CLAGPAG was active for ten years and had many achievements, not the least of which was organizing the first Pride Rally and first Pride Parade in Calgary.

{Note: the Delta Hotel of the past is not the same Delta today.  This year, the hotel hosted  the sold out, 40th Anniversary Coronation of the Imperial Sovereign Court of the Chinook Arch}