The recent abdication of Premier Alison Redford as head of the Alberta Progressive Conservative (PC) Party caused a reflection here on political transitions in the past, and former culture wars between the government and Alberta’s queer community.

Premier Don Getty was also chased out by his party in the early 90s, which started the reign of “King Ralph” Klein who became Premier in December 1992.  He then took the PCs to an electoral victory in June, 1993.

The run-up to that provincial election was marked with high-profile anti-gay comments from Alberta Government Cabinet Ministers.  Then Deputy Premier Ken Kowalski, publicly mused on CBC Radio that: “taxpayers’ money shouldn’t be used to support people with ‘abnormal’ lifestyles.”  He was referencing provincial government arts funding that had gone to the Banff Centre who had supported a performance art piece which dealt with themes of lesbian sexuality.

Diane Mirosh, the PC Cabinet Minister responsible for the Human Rights Commission said that: “gays and lesbians had [already] too many rights and perhaps they should be rescinded.”  The irony, of course, is that they had fewer rights than other Albertans because sexual orientation was then not a protected ground of the Alberta Individual Rights Protection Act: the provincial human rights legislation of  the day. 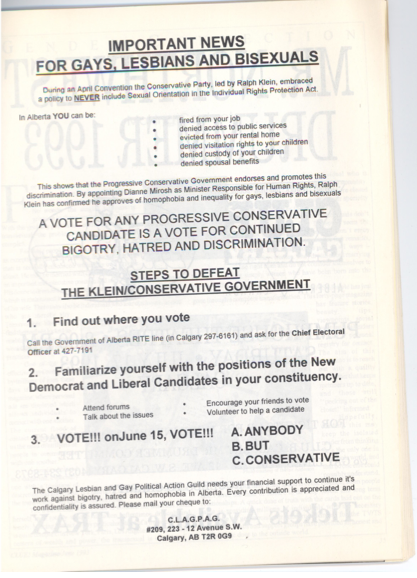 The Calgary queer community was vocal in its outrage and organized an anti-PC campaign during the election, which happened to be the same month for Calgary and Edmonton’s Pride Celebrations.  This was also the year Edmonton’s Mayor Jan Reimer proclaimed Edmonton Gay and Lesbian Pride Day, in sharp contrast to the ruling provincial government’s position. 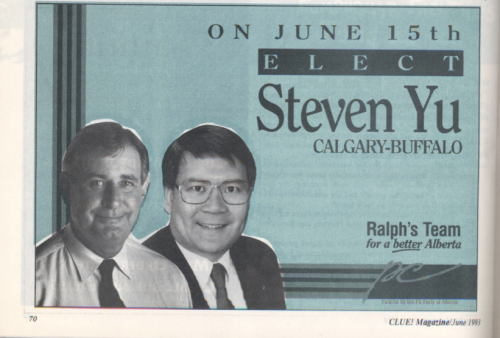 Despite the dodgy comments from PCs about human rights, they cagily advertised in Calgary’s gay press for their candidate, Stephen Yu, in Calgary Buffalo, long considered the queerest riding in the city (he came in 2nd, taking 40% of the vote).

Interestingly, in the last provincial election (2012), it was widely believed that anti-gay comments from Wild Rose Party candidates were a deciding factor in Alison Redford’s sweep into power despite polls predicting her demise.  The PCs rhetoric around tolerance in modern times is in stark contrast to the past.  However, the fact that the Alberta Progressive Conservative Party takes down its own leaders – from within – remains similar.