Posted on December 19, 2019 by calgarygayhistory | 6 comments

The Calgary Chinook Fund supports charitable organizations providing services, programming, and education, for and about the LGBTQ2 community. They also annually present a hero award. Notably, this year’s hero was consequential to our historic human rights struggle. At their October fundraising dinner, the hero award was given to Bill Wuttunee, posthumously, in the presence of family and friends. Here is what was said at the event by the Chinook Fund’s Gordon Sombrowski.

This year is the fiftieth anniversary of the proclaiming into law, the amendments to the criminal code which partially decriminalized homosexuality and therewith began the process of change that has led toward equal rights for the LGBTQ2 community in Canada. In seeking who to give our Hero Award to this year, we wanted to recognize the fiftieth anniversary of the change to the law. In working with the Calgary Gay History Project and Kevin Allen, the Chinook Fund Committee happened upon an incredible man who was a stalwart ally and champion for the gay community in Calgary and who has all but been forgotten. Unfortunately, we did not discover this man until after his passing. However, this evening we are joined by his daughter Nola, son Nisha, and family and friends.

I am thrilled to announce that our Hero Award Recipient for 2019 is William (Bill) Wuttunee.

Bill Wuttunee lived his life by the following words he expressed at age 85:

“Get active in your world to make it better. Don’t sit by and wait for others to do it.”

The lawyer, activist, and humanitarian from Red Pheasant First Nation in Saskatchewan co-founded what today is known as the Assembly of First Nations. The first indigenous lawyer in Western Canada, Wuttunee, also helped to secure voting rights for status Indians.

Yet the life of one of Canada’s true pioneers began in humble circumstances. Raised on the reserve in a family of 15, Wuttunee survived the residential school system. After moving to Battleford, Saskatchewan, to finish his last years in school, he won a scholarship to attend McGill University.

His presence there gave him the distinction of being one of only two First Nations people to attend university at that time; years later, he would also become the first indigenous lawyer to appear before the Supreme Court of Canada.

We honour him today because Wuttunee was one of our allies as an early and proud champion of LGBTQ2 rights at a time when others went out of their way not to help us. Wuttunee was Everett Klippert’s lawyer. Thus he gained the distinction of defending the last person in Canada to be prosecuted for homosexuality — his work helping to lay the groundwork for Prime Minister Pierre Trudeau’s later famed phrase in 1969, “the state has no place in the bedrooms of the nation.”

This came about because Bill Wuttunee decided in the 1960s to set up his own law practice in Calgary handling criminal cases and family law. He said, “I didn’t know anybody here. I came here because the weather was nice and the people seemed nice, and I’ve never been sorry. Alberta has been good to me, and good for my family.”

In 1966, Bill opened a branch office in Yellowknife, where one of his cases was to defend Everett Klippert in the case that led to changes in the law against homosexuality.  Charged with “gross indecency” because Klippert admitted to having had sexual relations with four separate men, he was sentenced to “preventive detention” as a dangerous sexual offender. He served five years, while his appeal worked its way through the courts to the Supreme Court, where it was finally dismissed in a controversial 3-2 decision: meaning imprisonment for life.

Then Tommy Douglas raised the issue in the House of Commons, and within six weeks Pierre Trudeau introduced changes to the Criminal Code, decriminalizing homosexuality. Bill Wuttunee proudly shared that, “Trudeau cited the Klippert case when he said that the state has no place in the bedrooms of the nation.” 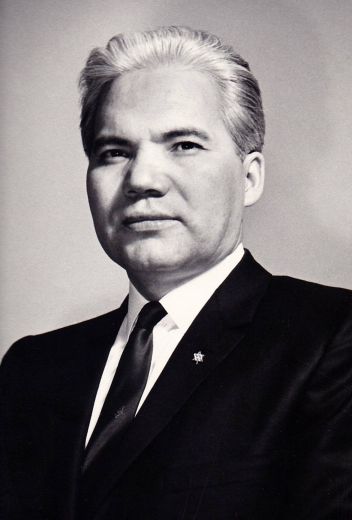 However, Bill Wuttunee did not only work on high profile cases like Klippert’s for our community; he was also known for handling small local matters. Courtesy of the Gay History Project I found this wonderful statement by Bill in his own words.

Wuttunee was to continue to be a champion for human rights to the end of his life, and even In his early 80s, Wuttunee sat on the Oversight Committee for the Truth and Reconciliation Commission, and the organization responsible for resolving thousands of residential school claims.

Dear supporters of the Chinook Lesbian and Gay Fund, it is my privilege and honour in this year of the fiftieth anniversary of decriminalization and in the spirit of reconciliation to ask you to rise in honour of William Bill Wuttunee, our Hero!

The gathered audience leapt to their feet for a tremendously long, heartfelt, standing ovation. Nola Wuttunee, a former APTN host, as well as actor, musician, and film producer, rose to accept the award and shared memories of her father. There were several moist eyes in the room, and we felt the warm glow of a shared humanity. 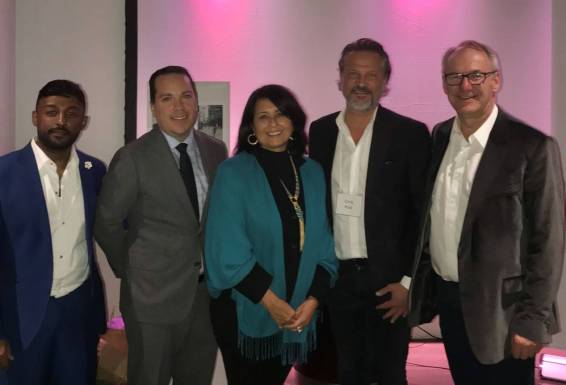 {Wishing you a reflective holiday season and a happy new year!}

1978: a Windi blowback for Anita Bryant

The Calgary Gay History Project has written before about gay activist Windi Earthworm and anti-gay rights crusader Anita Bryant – but separately. In fact, they had an antagonistic encounter in 1978. That year, Anita swung through Canada as part of Renaissance International’s Christian Liberation Crusade. She made a tour stop in Edmonton on April 29th. 40 Calgary activists hurried north, joining activists there, to protest her cross-Canada tour.

Anita Bryant in the May 1, 1978 edition of The Albertan

Windi and his friend Myra “My” Lipton went independently of the loosely organized “Calgarians against Anita” delegation. They decided direct action was required to disrupt Bryant’s auditorium of 6000 supporters. My remembered: “We got in under the guise that we were students doing a study about the spaces people meet in. We scoped out the stage and decided on our spot. I helped Windi chain and lock himself.”

My then went into the seats to find a spot to generate a call and response disturbance with Windi, but she turned back when she noticed audience members hassling him. She asked Windi if he was OK. He replied, “Yeah, except these really kind Christian folk are ready to hang me,” by the chain around his neck.

Windi Earthworm in the May 1, 1978 edition of The Albertan

Anita eventually appeared at the Northlands Coliseum under heavy police escort. Windi screamed: “You have me in shackles, Anita!” She replied, “I love you, and I know enough to tell you the truth so you will not go to eternal damnation.” Windi called back, “You love me so much you want me in prison.” The heckling continued intermittently throughout the event. The courageous Calgarians were detained briefly afterwards for questioning by police and were permitted to leave.

Posted on October 30, 2017 by calgarygayhistory | 2 comments

In exactly one week (November 7th) we will have arrived at the 50th anniversary of the Supreme Court verdict in Klippert v. The Queen. In the ruling, Everett George Klippert was declared a dangerous sexual offender for having consensual gay sex. It was confirmed that he should be incarcerated for life to protect both himself and Canadian society.

In this final of four posts, I would like to explore the role of Canadian media in bringing his case forward to the court of public opinion. Newspapers across the country gave the Klippert case a good airing with the bulk of editorials condemning the decision.

“Take this thing on homosexuality, I think the view we take here is that there’s no place for the state in the bedrooms of the nation, and I think what’s done in private between adults doesn’t concern the Criminal Code.”

was a borrowed phrase from the Globe and Mail’s editorialist Martin O’Malley. (Trudeau thanked O’Malley for the quotation.)

Sidney Katz, who had researched and written about the gay community extensively, wrote a notable column in the Toronto Star titled: “Gentle George Klippert – must he serve LIFE?” His second article quoted the dismayed reactions of many Toronto homosexuals.

The Winnipeg Free Press editorialized: “It is possible to deplore such activity without treating its practitioners as if they were monsters.” Even the Calgary Albertan (now the Calgary Sun) opined that “the spectre of a possible life sentence seems to us a little severe.”

The only big city newspaper in Canada to react in support of the decision was the Edmonton Journal whose position was against homosexual law reform citing its belief in the tendency of homosexuals to prey on the young.

The Montreal Gazette described Klippert “as the most publicized homosexual in history.”

The irony, of course, is that Everett was quickly forgotten and languished in jail for four more years. Even today, people remember Pierre Trudeau’s famous quote but do not connect it to homosexuality and its decriminalization. Many are shocked to learn that homosexuals were ever prosecuted in Canada in the first place.

Everett Klippert became a symbol of injustice and the trigger for law reform in Canada. Despite his life story being featured in every daily newspaper of note, he was not a subject of the nation’s mercy. Not really.

The point of Klippert month was to remember the person: not just the court case; not just the symbol; and not just the political wedge issue he represented in 1967.

He was a Calgarian.

He was honest to a fault.

He had a family who loved him.

And he was gay. 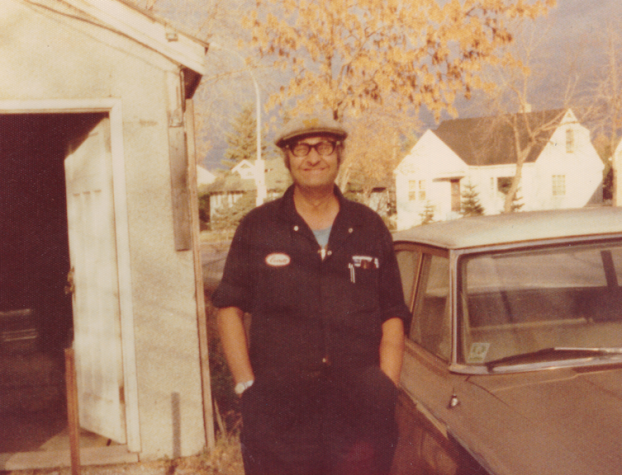