Posted on January 31, 2015 by calgarygayhistory | 3 comments

It has been a busy couple of weeks for the Calgary Gay History Project.  It seems like we’ve met with a tonne of people in Calgary recently, and on the West Coast this week.  Thanks to: Gene, Joey, Tereasa, Lisa, Aaron, Lara, James, Melody, Mark, Geordie, Nigel, Jim and Ayanna for all of the feedback, memories, stories and positive regard.

However, I want to make a couple of special mentions.  The Friday before last, Terry MacKenzie donated 4 bags of books to the history project – early gay readers, handbooks, social studies, and manifestos that will assist us as researchers in putting our local findings into a cultural context.  Perhaps the most notable contribution though are the Butch Bucks that Terry uncovered.  Sourced and retained from some fun event in Calgary in 1978 (Terry thinks the Parkside Continental perhaps), this alternative currency predates Calgary Dollars significantly!  If reading this you remember more about Butch Bucks and their origins, please contact us at the project, to fill in the details.

This week I was twice at the BC Gay and Lesbian Archives to meet with archivist and historian Ron Dutton, who has been working on the project for 39 years!  The archives, containing 750,000 items are amazingly in his home, but he maintains the collection as a publicly accessible archive.  Ron is passionate about our community’s history and a real inspiration for the much younger Calgary Gay History Project.  To get a sense of Ron and his mission check out this Vancouver Courier produced video about the archives.

Thank you Ron.  Thank you Terry.

Happy New Year!  The WordPress.com stats helper generated a 2014 annual report for the Calgary Gay History Project website.  This was a record year for us.

The concert hall at the Sydney Opera House holds 2,700 people. This blog was viewed about 13,000 times in 2014. If it were a concert at Sydney Opera House, it would take about 5 sold-out performances for that many people to see it.

Also I would like to warmly thank the Alberta Historical Resources Foundation.  I received a letter on January 2nd with the good news of a research grant that will support the book project as well as travel to Victoria, Vancouver and Saskatoon to visit their queer archives.

Finally, I would like to give a shout out to our colleagues to the North who are working on the Edmonton Queer History Project, and an exciting initiative this month to harvest their stories and archival materials.

The queer history project has some exciting news.  The province has come on as a project sponsor through the Alberta Historical Resources Foundation – thank you province’o’mine, and thank you Culture Minister Heather Klimchuk, who wrote us a kind congratulatory letter.

Since the project launched at last year’s Pride Week, there have been more than 7000 readers on the site including visitors from over 55 countries.  We have had two incredibly well attended public presentations, and one amazing gay history walk as part of the international Jane’s Walk movement supported locally by the Calgary Foundation. 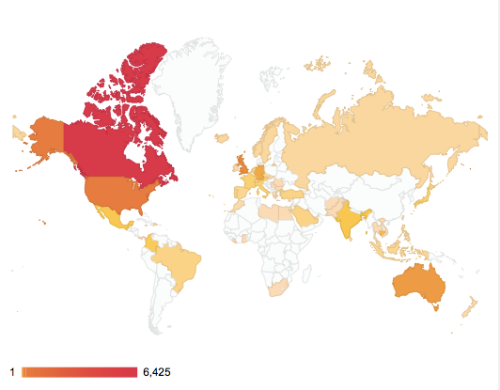 Many of you who missed the walk last May, have been asking for a repeat, and I am happy to report we have one scheduled for the evening of Wednesday, August 28th from 7:30 – 9:00 PM.  [I suspect that we will retire to a local pub afterwards for any who want to mingle and chat!]

The walk will commence from CommunityWise (formerly the Old Y) at 223 12 Avenue SW – an important building that was a focus for our city’s fledgling gay right’s movement in decades past.  A current tenant there is Calgary Outlink, our queer community support organization, who also is an ongoing sponsor of the queer history project.

Finally, we will have a table at this year’s Pride Street Festival, Sunday, September 1st.  Come by, pick up a project postcard, and talk to us about queer history in Calgary – we would love to meet you.

p.s. If you have not seen it, Stephen Fry’s open letter to U.K. Prime Minister David Cameron, calling for a ban of the Sochi Olympics is powerful.  Closer to home Alberta queer right activist, Kristopher Wells, called for a similar ban in an Edmonton Journal editorial.