The Calgary Gay History Project is commemorating the 50th anniversary of the decriminalization of homosexuality in Canada with a special event at the New Central Library.

In November 1967, Everett Klippert was sentenced to incarceration for life for being gay by the Supreme Court of Canada. This prompted a very famous quote from then Justice Minister, Pierre Trudeau. 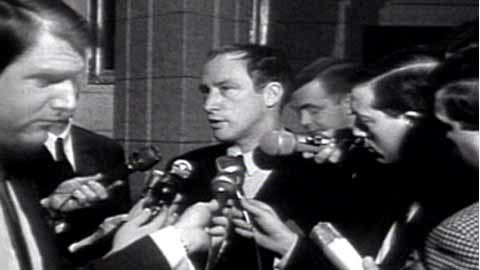 December 1967: “Take this thing on homosexuality, I think the view we take here is that there’s no place for the state in the bedrooms of the nation, and I think what’s done in private between adults doesn’t concern the Criminal Code.” Source: CBC (click to watch video).

On April 16, 1969, as Prime Minister, Trudeau presented the Criminal Law Amendment Act, (Bill C-150) in the House of Commons. The bill proposed to decriminalize homosexuality and allow abortion and contraception, along with other new regulatory measures on a number of less controversial issues. Debate raged in the House. The tone was rancorous and some Members of Parliament (MPs) were particularly shocking in their remarks.

For example, Calgary MP Eldon Wooliams said: “I do not want to have this kind of debauchery in our nation. I think there is a place for a filibuster. If people tell me to get on with the job, I will say to them: ‘Do you want me to legalize sexual intercourse with the animals of Canada?”

Bill C-150’s third reading passed on May 14th, specifically altering the crimes of gross indecency and buggery in private between two consenting adults aged 21 or older. Thus began a new chapter for the gay rights movement in Canada.

We intend to honour this consequential day in Canadian history! Planning has begun for a special event at the Central Library from 6:30 – 7:45 PM! We are designing an evening which promises to be full of history, theatre, and art. We are also seeking input and participation: if you have an idea for the evening program email us.

Celebrate Freedom: see you on May 14th!