There is a new museum exhibition at the University of Calgary called Trans Trans: Transgender Histories Between Germany and the United States, 1882-1966.

We strongly encourage you to check out the exhibition in the next few days while you still can. Not only is it a fascinating study on the connections between transgender individuals and the medical community who supported them, but also it is a meditation on gender identity in the 21st Century. Plus you can transition from observer to observed by getting your photo taken in a reproduced living room that was central to trans medical history.

The exhibit synopsis (from the Nickle Gallery website) reads:

Trans Trans explores a network of individuals in Germany and the United States from the turn of the twentieth century into the 1950s who profoundly shaped transgender histories and identities. Exchanging letters and photographs among themselves, these individuals created new communities in private, but they also sought to educate doctors and the public by submitting their photographs and stories for publication in medical journals and popular magazines. The exhibition retraces the connections between these private individuals, the medical and scientific authorities with whom they entered into dialogue, and the ways in which these dialogues became public or remained hidden away within archives.

Turning traditional medical-scientific history on its head, the exhibition documents the driving role that trans individuals played in the development of medical concepts and treatments. The show exhibits extremely rare images from the world’s first popular magazine to focus on trans identity, The Third Sex, which was published in Berlin from 1930-1932, and it tracks connections between this earlier German history and the work of Dr. Harry Benjamin, whose 1966 book The Transsexual Phenomenon drew from his years of training in Germany and work with trans patients to make a plea for acceptance and supportive medical treatment to an American audience.

Trans Trans is produced in co-operation with Michele Hardy, Curator, Nickle Galleries; the Magnus-Hirschfeld-Gesellschaft in Berlin; the Institute for History and Ethics in Medicine of the Charité Clinic, Berlin; and the Kinsey Institute for Research in Sex, Gender, and Reproduction in Bloomington, Indiana.

We had a stimulating three days of exploring trans identity and trans history at the University of Victoria’s Moving Trans History Forward 2016 conference, March 17-20. 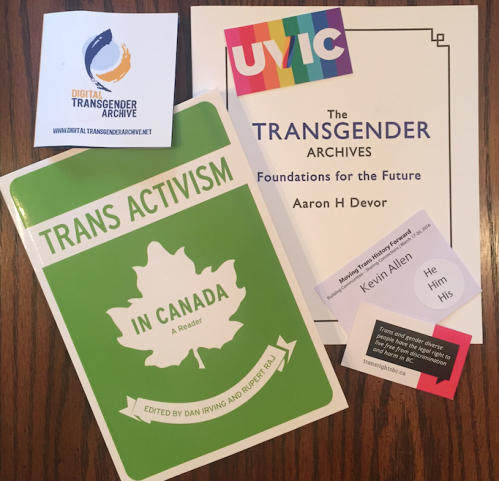 The conference was a grounding in important dates, personalties, and terminology in the transgender community. It also touched on current issues such as the need for preservation of trans histories and the status of trans materials in larger queer collections such as at the Canadian Lesbian and Gay Archives (CLGA).

Academics, community activists, artists and historians created a stimulating jam-packed event. And like at most conferences, some of the most interesting conversations were with the person you found yourself sitting beside at lunch. One highlight was learning about the Transvengers web comic.  A collaborative project between trans youth and researchers at the University of Exeter, that saw the youth interact fantastically with sexologists from the past.

We were delighted to learn that there will be a trans history exhibition at the Nickle Galleries at the University of Calgary this June. Called Trans Trans, the show will explore the influence of Magnus Hirschfeld on Alfred Kinsey through images found in the Kinsey archive and others in popular culture. Trans Trans is curated by U of C history professor Annette Timm, and her academic partners, Michael Taylor (Portland, Oregon) and Rainer Herrn (Berlin, Germany).

We talked to trans activist, Rupert Raj, about his time in 1970’s Calgary, and his association with the Gender Identity clinic at the Foothills Hospital. Following the conference, we found sources in UVic’s Transgender Archives about the physicians who ran the clinic as well as more on the early days in Calgary of the Foundation for the Advancement of Canadian Transsexuals (FACT).