The Of Colour Collective

Here is our latest history segment from this week’s broadcast of Calgary Rainbow Radio on CJSW:

Identity politics are very present in the public realm currently. The high profile Black Lives Matter protest at the 2016 Toronto Pride Festival has given the LGBTQ2 community pause to consider issues of privilege and racism within our own relationships and organizations.

Yet this is not the first time in Calgary that issues of racism within the gay community have been tackled. The Calgary Gay History Project recently interviewed a number of people who were involved with the groundbreaking Of Colour Collective, which existed in the 90s, and the work that they did addressing racism, sexism and homophobia and the intersections between them.

The origins of the group began in the feminist community. In the early 90s, a small group of women of colour connected to the Calgary Status of Women Action Committee (CSWAC) formed a collective they called WOCC – or the Women of Colour Collective. WOCC members wanted to challenge both hetero-normative assumptions in the women of colour community as well as white privilege in the local feminist community, which they felt was endemic in Calgary.

WOCC ended up having a great impact on CSWAC, and on its most high-profile project, the Herland Film Festival; eventually WOCC was invited to become a co-presenter of the festival. WOCC members who identified as queer increasingly became preoccupied with a perceived ethnic divide in the local queer community. WOCC co-founder Susanda Yee in February 1992 met some queer men of color who spoke of going through similar struggles, and they decided to form a new group.

There was some debate about whether it would be a social or an activist group and it tried to be both. When they were formulating a name for themselves different options were bandied about. Queers of Colour worked for some. Another cheekily suggested Off Colour.  But then Of Colour was proposed as a way to centralize and focus on that aspect of difference that united the group. When the noun was dropped (women, men, queers, etc.), the focus became on the adjective that united participants and defined their experience.

Through Gaylines, at the Old Y, they began meeting on the first Sunday of the month. In addition, Of Colour began socializing together a lot – going to gay bars as a group, and meeting up at art-house cinemas like the Plaza Theatre in Kensington for movies and post-film coffee discussions.

A formative moment for the collective occurred in the fall of 1992 when they travelled to Vancouver for a national human rights Conference called Outrights whose aim was to form a pan-Canadian queer organization. It was there that they met similar groups such as Khush: South Asian Gay Men [and Women] of Toronto. The Calgarians were both inspired and politicized by the experience and left with the sense that they were not alone. Queers of colour across Canada were striving for self-expression, to be more fully seen and to move beyond stereotypes.

Upon their return to Calgary, Of Colour divided into two overlapping groups – the working collective devoted to political action and the general collective who worked on social events.

In the Spring of 1993, the Collective was invited to speak at the Calgary Networking Club, an organization for gay and lesbian professionals. After their presentation, the audience started asking pointed and hostile questions such as: “Don’t you think YOU’RE being racist?” Or: “Why are you so angry at white people?” One person even told the speakers that: “immigrants need to go, because we were here first.” The Of Colour Collective representatives were shocked but the group doubled down on their commitment to educating and representing.

The larger queer community though was not universally hostile. Around the same time, the Calgary Lesbian And Gay Political Action Guild (CLAGPAG) invited Of Colour to be part of their diversity education campaign for service providers in Calgary. Of Colour accepted the invitation and the project, which created posters for agencies to display in their offices and lobbies, was deemed a success.

On June 20, 1993, Susanda Yee and Paul Fernandez spoke at the Pride Rally at City Hall representing the Of Colour Collective.  They said that gay media such as Speak Sebastian (on CJSW) and CLUE! Magazine and the gay community at large ignore the issue of racism within the queer community.

That September, Clue Magazine did a cover story on diversity, which includes a guest editorial by Of Colour Collective member Kevin D’Souza. Controversy erupted over the feature article when Paul Fernandez strenuously objected to his published interview in a strongly worded letter to the editor and a Clue! Magazine investigation of the interview tapes confirmed that there were indeed misquotes and quotes taken out of context. Clue Magazine issued an apology.

Until 1995, the conflicts and controversies were largely contained within the queer community but in June of that year, the Of Colour Collective’s work blew up in a way that attracted national attention. Some members of the Of Colour Collective had experience producing film festivals; they thought to organize a Queer Film Fest titled: The Fire I’ve Become. The Collective booked the Glenbow Museum as their screening venue and there were no issues until their program came out. Some of the films being shown had racy titles and perceived X-rated content, which quickly attracted the ire of social conservatives. 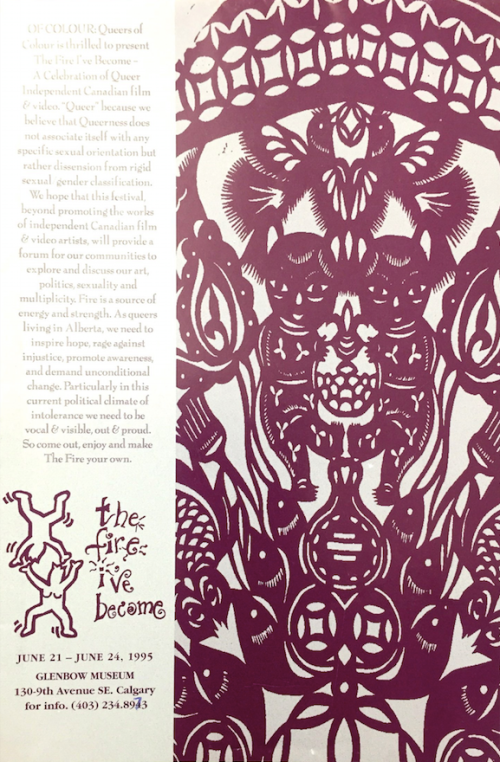 Pastor Ron Goodhew of the Jubilee Christian Centre contacted MPs, MLAs, and leaders of over 200 local churches to have their members protest the festival. He explained: “I don’t think the majority of people in Calgary would approve of their tax money paying to show restricted movies in a government-funded building.”

Ruksanna Makris, a spokesperson for the festival said in the Calgary Sun: “We contacted the police and nothing we are doing is against the Criminal Code.”

Yet many politicians of the day threw their disgusted 2 cents in: for example, Calgary Southeast Reform MP, Jan Brown, said she was appalled that the festival was funded in part by the Canada Council for the Arts.

The Glenbow Museum decidedly did not like the heat from the hundreds of calls protesting the venue rental and had reservations about letting the festival go forward, but after an intense meeting with the Of Colour Collective and their supporters, the Glenbow Executives allowed it.

Some members of the gay community were also hostile about the festival, worried about losing face and moving backward on human rights in Alberta. Michele Sharpe, Executive Director of Project Pride said in a Globe and Mail interview: “They have put the community back 20 years. They expect the entire gay community to support them and they are not going to get that. There are people, including myself, who are upset with some of the titles.”

Filmmaker Michelle Wong from the Of Colour Collective was given a crash course in media relations and was the official media spokesperson over the controversy. A couple of her main talking points were the fact that the festival crystallized gay issues and brought them to a larger public. She also countered that gays pay taxes in Canada and have every right to access public funding and public venues for their events.

The four-day festival turned out to be very popular. Its audience members had to cross through a picket of anti-festival demonstrators – but they filled the theatre every night.

In 1996, the festival presented its second iteration of the Fire I’ve Become at the Uptown Cinema.  Audience numbers disappointed the organizers and Michelle Wong said that the 1996 festival felt like a failure. That blow, combined with the fact that some key members of the Of Colour Collective had begun to leave Calgary, meant the group became less active. By 1998, the group was effectively dormant. They then formally wound their operations down handing over their accounts to the Gay and Lesbian Community Services Association (GLCSA), the organization known to us today as Calgary Outlink.