Kevin has spent the week in Ottawa: working, doing research and going to museums. The Canadian Museum of History just unveiled its new permanent exhibition: the Canadian History Hall – quite impressive. Looking for Calgary gay history connections, we were surprised to find a couple. A photo of Jean L’Heureux (the subject of last week’s post – although he was not cited in the picture) and a rainbow pride banner with its origin story which was created in Calgary in 2005.

We also stopped into the Canadian War Museum to get some snaps of the “Electropsychometer” also know as the Fruit Machine, which the Canadian Government used to eliminate homosexuals from the public service in the 1960s. Tereasa wrote a post about it a few years ago. 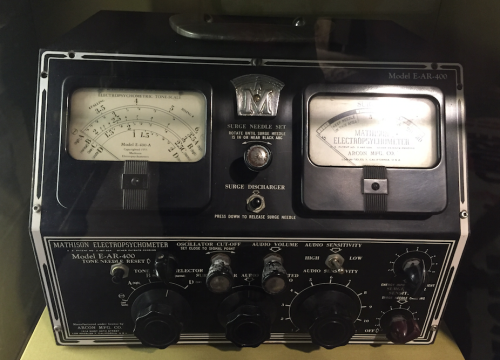 Pride Week in Ottawa begins shortly and there are already signs of rainbows popping up in the nation’s capital, but I am looking forward to coming home to experience YYC Pride. We will have a history booth at Pride in the Park on September 3rd and there are a couple of gay history walks planned on August 31st and September 2nd. We hope to see you out.

Nio’kskatapi in Siksiká (Blackfoot) means “Three-Persons” in English. It was a name of honour given to the explorer, outcast and infamously known homosexual, Jean L’Heureux. Born around 1830 near Montreal, L’Heureux had ambitions of becoming a Catholic priest but was kicked out of seminary “for serious misconduct.”

He fled west ending up in St. Albert where he affiliated himself with the Oblates’ mission there. Caught in the act of sodomy he was cast out of the precinct. He made his way to Montana where he found Jesuits engaged in the building of a mission. Successfully impersonating a priest for a time, he was eventually busted and sent away. L’Heureux found sanctuary with the Blackfoot who, unlike the settlers and missionaries, were comfortable with his sexual preferences.

He became fluent in Blackfoot and a trusted friend and advisor to the First Nations in the region. L’Heureux preferred the company of indigenous peoples to other settlers he encountered. He also had a conflicted relationship with the Catholic clergy who were proselytising in the territory. The missionaries widely condemned his homosexuality as well as his clerical appropriations. Yet, after saving the life of one stricken Father Albert Lacombe and nursing him back to health in 1865, his status improved amongst the Catholic brethren.

Living and travelling in the Siksiká camps, L’Heureux preached that the First Nations spiritual beliefs were similar to his own: the primary difference being that the Christian God was composed of three persons in one. An amusing concept for the Siksiká, L’Heureux was forever renamed “Three-Persons.”

In the 1870s, L’Heureux wrote and mapped a geography of Blackfoot lands as well as created a Blackfoot-English dictionary which was used by traders at Fort Calgary. Leading up to the Treaty 7 negotiations, the Lieutenant Governor of the North-West Territories, David Laird, wished for L’Heureux to act as interpreter for the Crown. However, L’Heureux declined as he already had committed to translate for Isapo-muxika (Crowfoot), the Siksiká head chief who was his personal friend.

The Treaty 7 negotiations took place on September 22, 1877. L’Heureux was the official spokesperson for the Siksiká leaders with the Government representatives. During the negotiations, he explained the terms of the treaty to the Blackfoot delegates and provided them with advice. One observer commented that L’Heureux “stood unswervingly with the Indians as an Indian.” When the negotiations concluded, L’Heureux inscribed the names of the Chiefs on the treaty document, validated each of their marks and signed it himself, as a witness. Through L’Heureux, the Chiefs thanked the representatives of the Government of Canada.

For the remainder of his life, L’Heureux often interceded on behalf of First Nations people and their struggles with the Government. He was hired by the Department of Indian Affairs in 1881 as an interpreter, a position he held for ten years.  L’Heureux gained the enmity of an Anglican missionary, John Tims, who claimed he showed Catholic favouritism in his work for the Department. When nothing happened with that assertion, Tims accused L’Heureux of immorality on the reserve; he was quickly sacked. No investigation was ever conducted into the allegation.

Destitute and in ill health, L’Heureux lived a nomadic existence for many years. He moved to Father Lacombe’s hermitage at Pincher Creek for a time and then retreated to the foothills where he became a known recluse. Meanwhile, Father Lacombe had built a home for the poor and indigent in Midnapore. After repeated attempts, he managed to convince L’Heureux to move there in 1912. Jean L’Heureux died of old age at the Lacombe Home in 1919 and was buried in its grounds. He is listed in the church records as “a lay missionary.”

Note: Treaty 7, the original document, is currently being displayed at Fort Calgary until October 2017: on loan from Library and Archives Canada.