A virus-free club in YYCgayhistory?

{The Calgary Gay History Project has hunkered down at home, doing our part for social distancing in Canada. As a distraction, we’re diving deep into local AIDS history over the next few weeks to explore how Calgarians reacted to this earlier pandemic.}

In May 1987, four years after the first case of HIV was diagnosed in Calgary, local entrepreneurs Ross Anderson and Terry Daley attempted to start an AIDS-free private club. An initial advertisement received interest from more than 300 Calgarians who wanted to join.

The club concept included dining and dancing areas, a night club and a gym. To join, people would pay $300 and need to have two tests for the virus, one when they applied and the next one eight weeks later. There was also an ongoing testing schedule proposed, which was never finalized.

Doug Morin, the executive director of AIDS Calgary, disapproved. He explained that people who join the club might be at a higher risk of catching the disease than people who don’t.

“It spreads like wildfire when everyone assumes he’s OK. It’s so scary when people stick their heads in the sand, and don’t worry about it. The test is only good for the day it’s taken,” Morin added. 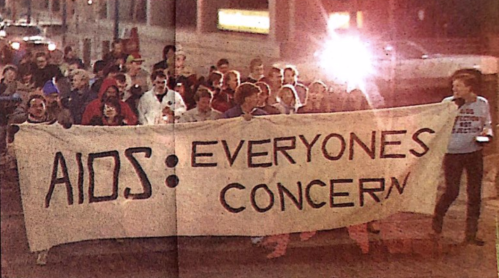 Anderson, in an interview in the Calgary Herald, said he did not know exactly when the club would open or where it would be.

“The fear of AIDS affects everybody. People like yourself and myself are inhibited about making contact. We want to provide a situation so [people] can act normally,” Anderson clarified. He mused that setting up the club would not be easy, and they would not be able to provide absolute health guarantees to clubgoers.

At the time, 33 people had been diagnosed with AIDS in Calgary.