1978: a Windi blowback for Anita Bryant

The Calgary Gay History Project has written before about gay activist Windi Earthworm and anti-gay rights crusader Anita Bryant – but separately. In fact, they had an antagonistic encounter in 1978. That year, Anita swung through Canada as part of Renaissance International’s Christian Liberation Crusade. She made a tour stop in Edmonton on April 29th. 40 Calgary activists hurried north, joining activists there, to protest her cross-Canada tour. 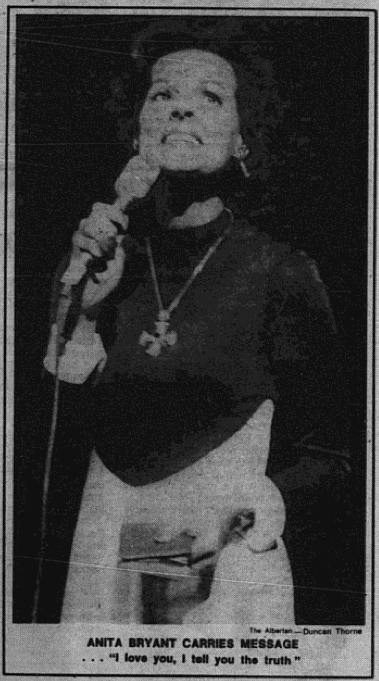 Anita Bryant in the May 1, 1978 edition of The Albertan

Windi and his friend Myra “My” Lipton went independently of the loosely organized “Calgarians against Anita” delegation. They decided direct action was required to disrupt Bryant’s auditorium of 6000 supporters. My remembered: “We got in under the guise that we were students doing a study about the spaces people meet in. We scoped out the stage and decided on our spot. I helped Windi chain and lock himself.”

My then went into the seats to find a spot to generate a call and response disturbance with Windi, but she turned back when she noticed audience members hassling him. She asked Windi if he was OK. He replied, “Yeah, except these really kind Christian folk are ready to hang me,” by the chain around his neck.

Windi Earthworm in the May 1, 1978 edition of The Albertan

Anita eventually appeared at the Northlands Coliseum under heavy police escort. Windi screamed: “You have me in shackles, Anita!” She replied, “I love you, and I know enough to tell you the truth so you will not go to eternal damnation.” Windi called back, “You love me so much you want me in prison.” The heckling continued intermittently throughout the event. The courageous Calgarians were detained briefly afterwards for questioning by police and were permitted to leave.