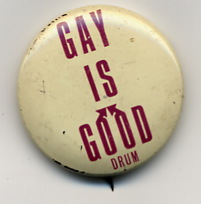 The rallying cry of gay liberation throughout the 1970s, was in fact coined in 1968 by pre-Stonewall American gay rights activist Frank Kameny. Frequently found on placards and buttons, the slogan also made its way into famous liberation manifestos. Lesbian activist, Martha Shelley’s 1972 booklet, “Gay is Good” was, and still is, radical and explosive:

Look out, straights. Here comes the Gay Liberation Front, springing up like warts all over the bland face of Amerika, causing shudders of indigestion in the delicately balanced bowels of the movement.”

Gay is Good was heard in Canada also.  The country’s first large scale political demonstration on Parliament Hill was on August 28, 1971. Despite the rain, over 100 activists marched and picketed.  Toronto Gay Action’s Charlie Hill proclaimed Gay is Good during his historic speech in support of the “We Demand” brief submitted to the federal government a week prior.

Gay liberation made its way to Calgary in 1972 with the short-lived formation of a local chapter of the Gay Liberation Front.  Calgary liberation activists mobilized around a more permanent organization in June 1976: the Gay Information Resource Centre (GIRC).  In 1980 GIRC organized the first gay rights political demonstration in Alberta, with our very own “placard-waving homosexuals” on the steps of Calgary City Hall.