Calgary Pride launches tomorrow, and the Calgary Gay History Project has a full slate of activities during the next ten days. Here are the offerings:

Friday, August 23rd: The Our Past Matters: Stories of Gay Calgary e-book release! 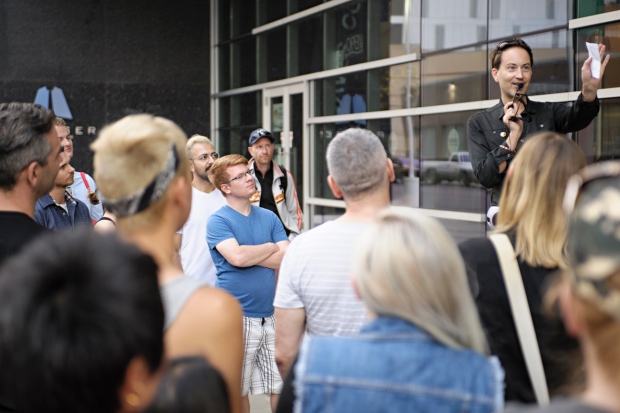 Monday, August 26th: Bill C-150, the bill “decriminalizing” homosexuality came into force on this day, 50 years ago. Keep your eyes peeled for a particular essay to commemorate this important date.

12:00-4:00 PM  – Join author Kevin Allen for a book signing of Our Past Matters Stories of Gay Calgary at Chapters-Indigo Dalhousie or just stop by to say, “hi.”

11:00 AM – 6:00 PM – Pride in the Park. After the parade, stop by the Calgary Gay History Project’s History Booth. Share your own stories and learn more about Calgary’s LGBTQ2 Past.

Phew. It’s going to be a busy Pride!

On a final and sadder note, the Calgary Gay History Project would like to acknowledge the sudden and unexpected passing of Lisa Fahey last month. The 47-year old Calgarian was an indefatigable ally to our community and a driving force behind the Pride Employee Network for Imperial. She was a massive fan of the Calgary Gay History Project: one of our biggest cheerleaders in fact. Lisa regularly marched in the Calgary Pride Parade with her rainbow-festooned wiener dog, Pebbles – who proved to be a media darling, year after year. Lisa’s big heart, enthusiasm, and deep regard for social justice will be sorely missed. 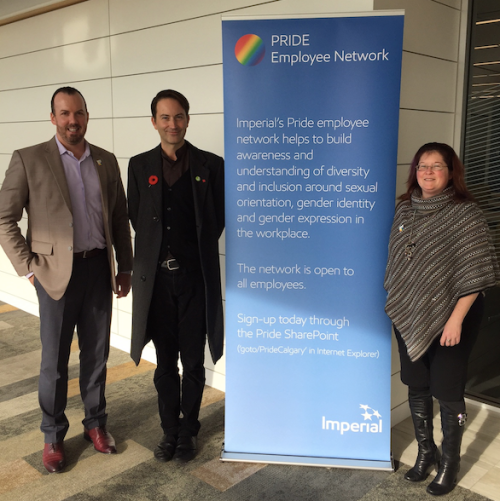 Thus, it is astounding to me that the Fairy Tales Queer Film Festival is on its 20th iteration. Significantly, they have produced their own feature documentary to mark the occasion called: OUTLIERS: CALGARY’S QUEER HISTORY. The film will premiere Friday, May 25th at 7 PM. We were ever so pleased to support them in this mammoth undertaking. When the Calgary Gay History project started in 2012, we hoped it would lead to a community of local queer historians and OUTLIERS makes manifest that ambition – we couldn’t be happier.

Additionally, Fairy Tales is close to my heart, as I was present in year one (along with colleagues Kelly Langgard and Trevor Alberts). I have watched it blossom into the confident adult it has become – this year growing itself into the Calgary Queer Arts Society – an excellent move for the organization.

So here are some of my fondest Fairy Tales memories from the early days.

The poster for Fairy Tales #1 was done by the accomplished Calgary artist Lisa Brawn (famous now for her woodcut art); it remains one of my favourites.

Fairytales poster from 1999 (a little worse for wear on my bulletin board).

Brenda Lieberman, arguably Calgary’s most notable film programmer, began working on Fairy Tales in 2000, while she was staff at the Calgary Society of Independent Filmmakers (CSIF) and continued on with the festival as their talented volunteer programmer until 2006.

Kevin Allen and Brenda Lieberman at a Fairy Tales Fundraiser at Money-Pennies. From Outlooks Magazine, May 2002.

The festival grew and broke away from the CSIF to become its own non-profit society on January 30, 2004. Gordon Sombrowski (now my husband), who had been on the programming committee for a couple of years, stepped up to become the Society President, a role he served until 2010. 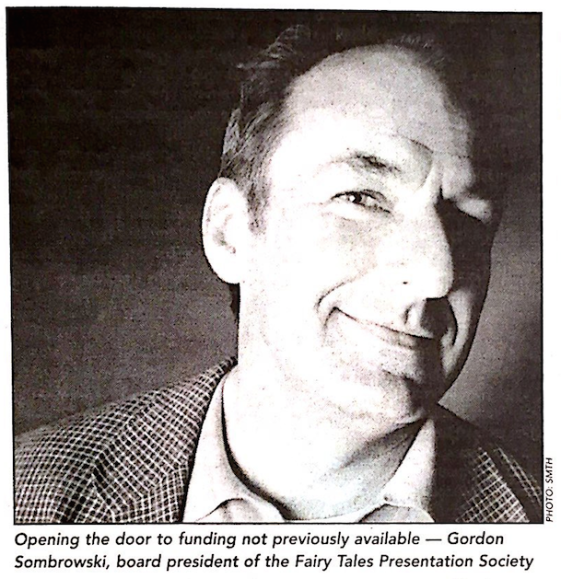 Festival Preview from FFWD Magazine June 3, 2004 (we sure miss do FFWD)!

Fairy Tales always has had clever graphic design, but there does seem to be a preoccupation with food-themed images. Here is a tasting: 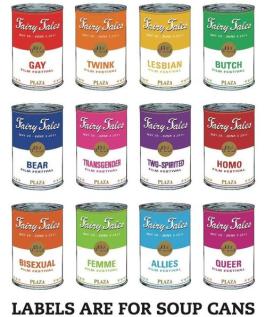 Congratulations to everyone, past and present, who sustained Fairy Tales to age 20. We are decidedly looking forward to opening night on Friday!