Posted on September 15, 2017 by calgarygayhistory | 4 comments

{Our sympathies go out to the friends and family of David Crosson, a lovely, witty man who passed away this week. A successful interior designer, he was also pivotal in the city’s gay media history through his work as editor of Outlooks Magazine from 1997 – 2005. He will be missed. – Kevin}

No other gay organization in Calgary has the long and storied history of the Imperial Sovereign Court of the Chinook Arch (ISCCA). A chapter in the International Court System, the ISCCA hosts many drag events throughout the year as well as their signature coronation ball which elects a new Empress and Emperor annually. ISCCA events are dependably fabulous and fun. They often are also fundraisers for important community causes.

The Court System started in 1965 in San Francisco, and the first Canadian chapter began in Vancouver in 1971.  In the early 70s, a handful of gay friends from Calgary who were active at Club Carousel escaped to Spokane, Washington for a long weekend road trip. By chance, they encountered a drag ball hosted by the Imperial Court of Spokane. Not only did they have a terrific time, but they met other gays from all over North America who were also in attendance. The Calgarians were hooked: in the next couple of years, they travelled to other Court events in Seattle, Portland, Vancouver, and Anchorage. 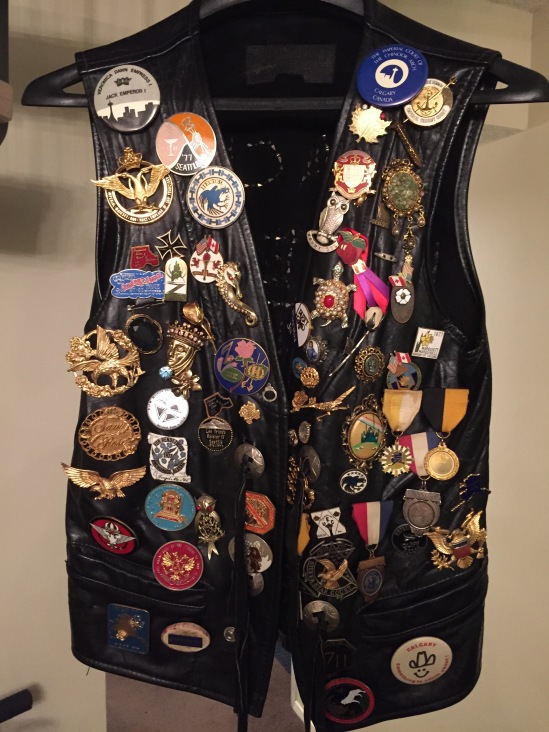 Court organizer and First Emperor, Jack Loewen, owned a leather vest with souvenir pins from Court events he travelled to.

Organization of the Calgary court began in April 1976. An application was made to the Mother Court of Canada in Vancouver, and by June of that year, Calgary’s charter was granted. The organizers looked for local inspiration in naming their court, settling on “Chinook Arch” as an iconic Calgary phenomenon. Legally they registered themselves as a daughter group of the Scarth Street Society which also operated Club Carousel. Their first major function was the coronation ball held in January 1977 at the Holiday Inn. With a small loan of $500 from the Club, they hosted an event that made history. It was one of the most elaborate balls the Court system had seen to date, featuring a sit-down dinner and the crowning of Calgary’s first Empress Veronica Dawn and first Emperor Jack. Representatives from Courts in San Francisco, Seattle, and Alaska were in attendance.

In the first year of operations, the Calgary Court had paid back their loan and ended the year $1700 in the black. Generally speaking, any profits the Court makes from their activities are donated to worthy causes. However, in the 70s it was sometimes difficult to find charities who would accept support from the gay community. Emperor Jack, in an Outlooks interview, remembered that the children’s hospital rejected their potential donation then because it came from a gay group. In contrast, the Children’s Wish Foundation was a group who early on did accept gay monies and consequently has been a recipient of ISCCA’s philanthropy ever since.

In the Court’s fourth year of operations, it decided to become independent of the Scarth Street Society and go its own way. There were some communication issues between the two groups, and Club Carousel itself had come to a natural end as members migrated to the more popular commercial gay bars which had emerged in Calgary.

Like the police/pride debate of this summer, Calgary’s LGBTQ2 community has been polarized before. In 1980, the community was extremely divided on the idea of having a gay rights march as part of the national conference of the Canadian Lesbian and Gay Rights Coalition which the city was hosting. A representative from the Court said to the Calgary Herald: “the minute you start flaunting yourself, you’ve got a problem [The march] is an embarrassment to the entire community.”

However, feelings changed. 11 years later at Calgary’s first Pride Parade, Calgary’s 15th Empress, Tiffany (Lawrence Steedman), led the parade in a purple beaded gown and confidently faced down protesters who spat and cursed. Tiffany said: “I’m proud to represent my community. Every drag queen wants to be empress, it’s an honour.” Member of Parliament Svend Robinson, who spoke at that event gave the nod to the Court explaining that it had been drag queens who bravely were the vanguard of the gay rights movement in North America.

Coronation ’86 Poster from the Broach Magazine

Toronto writers from The Body Politic were bemused by the Court when they wrote an in-depth feature about Calgary’s gay community published in September 1980:

“The court system seems to be a purely western phenomenon, and rather bizarre to most easterners. Most gay activists, even western ones, seem slightly embarrassed by the whole thing and tend to react as if they’re being forced to talk about a tribal custom they really wish the anthropologists hadn’t discovered. [The Court] simply throws the biggest gay parties Calgary gets to see, and the intrigue behind who gets elected Emperor and Empress probably makes a run at the Calgary mayoralty seems rather tame.”

Ironically, a Toronto Court would form later in that decade holding its first coronation ball in November 1987.

Other notable Calgary Court events include Mayor Ralph Klein’s famous impromptu speech at the 5th annual coronation ball in 1981. The speech, in support of the gay community, proved ground-breaking and those in attendance gave him a three-minute standing ovation. Sadly, he recanted his sentiments in the controversy that quickly followed.

In 1989, Court members ended up in a court of the legal kind, over a tiara snatching incident. The crown was stolen as a ransom for an outstanding debt on ball gowns which allegedly was owed by the queen who had won it.  The judge eventually acquitted the five accused of stealing the headpiece “due to an honest misunderstanding.”

The ISCCA also has sponsored daughter Courts into existence.  In September 1990 they were instrumental in granting a charter to Regina’s Court: the Imperial Sovereign Court of the Governing Body, Golden Wheat Sheaf Empire.

However in Calgary, perhaps the ISCCA’s biggest impact has been philanthropy. The Court took a leadership role during the AIDS crisis in Calgary, advocating for HIV prevention and conducting pivotal fundraising for AIDS research and housing of people with AIDS. Since its inception more than 40 years ago, the Court has raised and donated hundreds of thousands of dollars for causes close to their heart. Good work we can all celebrate.