Sir John Wolfenden came to Calgary in 1973 as part of the University of Calgary’s distinguished lecture series. His public lecture delivered at MacEwan Hall on April 4th was titled: ”Crime and Sin: The Distinctions drawn in the Wolfenden Report.” 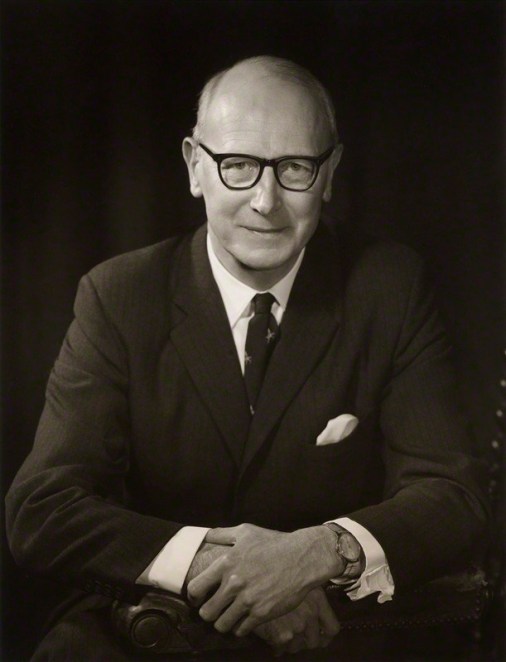 Sir Wolfenden, Vice Chancellor of Reading University in the United Kingdom, was appointed to head an inquiry into British homosexuality in August 1954. The impetus for the public inquiry was the uproar about the Lord Montagu scandal. Edward Montagu was a British Peer found guilty of having had consensual homosexual sex and was imprisoned for 12 months along with two others, Michael Pitt Rivers and Peter Wildeblood who received 18-month sentences each. At the time they joined over 1,000 men in British prisons due to same-sex sexual activity.

Wildeblood was the only defendant to admit to his homosexuality, and in 1955 released a book about his experience suffering at the hands of the law and the British establishment. The book called, Against the Law proved very popular. He wrote a second book on the subject of homosexuality the following year, called A Way of Life, which included twelve essays positively describing a number of homosexuals he had known.

Wildeblood became a key witness into the Wolfenden Inquiry and helped inform the inquiry’s unexpected recommendation that: “homosexual behaviour between consenting adults in private should no longer be a criminal offence.” The report further stated: “homosexuality cannot legitimately be regarded as a disease, because in many cases it is the only symptom and is compatible with full mental health in other respects.”

Wolfenden’s report titled the Report of the Departmental Committee on Homosexual Offences and Prostitution was published in September 1957 and sent ripples throughout the Commonwealth. It took ten years, and a different government, to translate the report’s recommendations into law, but decriminalization of homosexual behaviour in the UK happened in July 1967.

Archival copy of the Wolfenden Report

At his lecture in Calgary, Wolfenden told the audience “there are areas of private life that are outside the law.” He explained that his report took the stand that homosexuality was possibly immoral, but not illegal. He asked how far should a government legislate the behaviour of people and what are the boundaries of morality and legality and where do they join?

Advertisement in the Gauntlet Newspaper on March 28, 1973.

At the time the report was written, he explained that 90% of all blackmail cases in the UK were related to male homosexuality. Wolfenden said that by relaxing the laws against it, the legal aspect of the blackmail had been removed.

Individual freedom was paramount for him. “The function of law is to ensure to me the freedom to do what I want to do, so long as my freedom doesn’t impinge on someone else’s freedom to do whatever he wants to do,” he concluded.

As an interesting historical footnote, Peter Wildeblood, one of the UK’s earliest gay activists, left the UK in the 80s and became a Canadian citizen. He died in Victoria, BC in 1999.

p.s. Recently I had the chance to see an archival copy of the Wolfenden Report – it was a real thrill to see an original of the document that so influenced Canadian legal thinking!