RISE: An Evening of AIDS History in YYC

Two legendary figures associated with AIDS History, Cleve Jones and Ruth Coker Burks, are speaking in Calgary during Calgary Pride; we are agog!

Join us on Wednesday, August 28th, from 7-10 PM at the Plaza Theatre for an evening of social commentary and essential history.

Ruth Coker Burks is perhaps better known as the Cemetery Angel. Ruth, a former caregiver of AIDS crisis victims, is an AIDS awareness advocate based in Arkansas. During the onslaught of the AIDS epidemic, she used her salary as a real estate agent to care for AIDS patients whose families and communities had forsaken them. Due to prejudice, fear, and stigma surrounding the disease, she was often the patients’ only caregiver until their passing. She is also recognized for burying abandoned bodies in her own family cemetery in Hot Springs, Arkansas.

Cleve Jones co-founded the San Francisco AIDS Foundation which grew into one of the largest and most influential People with AIDS advocacy organizations in the United States.

In 1985, Jones then started The Names Project, which resulted in tens of thousands of people making quilt panels to commemorate those they had lost to the disease. Also known as the AIDS Memorial Quilt, thousands of panels at a time toured North America. The Canadian National Tour of the quilt stopped in Calgary in July 1989. The 1000 visiting panels were hung in layered sections in the Calgary municipal building atrium. Fourteen panels created in Calgary were added to the Quilt during its pause in the city.

Jones will be available for a book signing at Pages on Kensington after the event.

There will be a free after-party for everyone who wants to carry on the conversation over beverages immediately afterward at Twisted Element.

RISE: a social commentary with two legendary voices of the LGBTQ+ movement is presented by Twisted Element and HIV Community Link. Tickets are available: here. 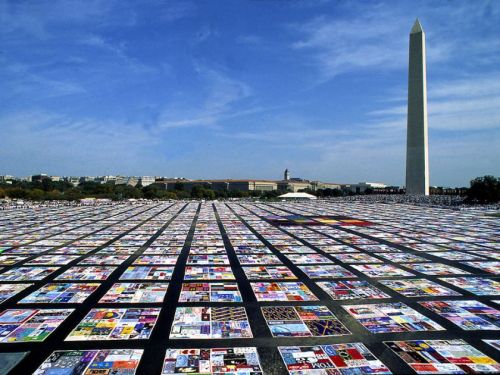 The NAMES Project AIDS Memorial Quilt is the largest piece of community folk art in the world.

One response to “RISE: An Evening of AIDS History in YYC”