Before Gay Marriage in YYC

Posted on February 9, 2017 by calgarygayhistory | 5 Comments

The Metropolitan Community Church was founded by Reverend Troy Perry in Los Angeles in 1968 and the movement grew quickly, addressing a pent-up demand in the gay community for spiritual services. Within a decade there were congregations all over North America including six in Canada: Calgary, Edmonton, Vancouver, Ottawa, Toronto, and Montreal.

The Calgary MCC Church began in September 1977, with the arrival of Reverend Lloyd Greenway from Toronto. Church services were initially held Sunday Evenings at the Unitarian Church on 16 Ave. NW. Then in June 1978, MCC Calgary services moved to the Backlot, a 150-seat theatre at the back of a gay bar named Myrt’s at the corner of 9th Ave. and 7th St. SW. Sunday morning services at the Backlot commenced at 11:30 and a typical congregation would have about 20 parishioners, swelling to 50 or more when a celebrated MCC minister came to town. Troy Perry himself led the Calgary Sunday morning service on February 18, 1979.

Reverend Greenway proved to be a polarizing figure in the Calgary community, known for both his personal charm and charisma, as well as his unorthodox personal life. However, he became a leading figure in the community and a go-to commentator regarding gay issues in Calgary media.

In July 1978, Reverend Greenway conducted Calgary’s first MCC Holy Union between Bruce Grant and Russ Raymond. The two young men gathered their friends and families at the Unitarian Church to witness their marriage-like ceremony – 27 years before same-sex marriage would be legal in Alberta.

The Calgary Gay History Project recently interviewed Russ about this landmark event. He explained that at the time they did not care about the legality of the service, rather they were very interested in making a spiritual connection as a couple. Russ added that he loved the excitement of that day.

Although their relationship lasted but two years, their Holy Union was groundbreaking in its day. Russ has donated his Holy Union Certificate and photos of that day to the Calgary Gay History Project Archives.  Thank you, Russ, for sharing your story with us! 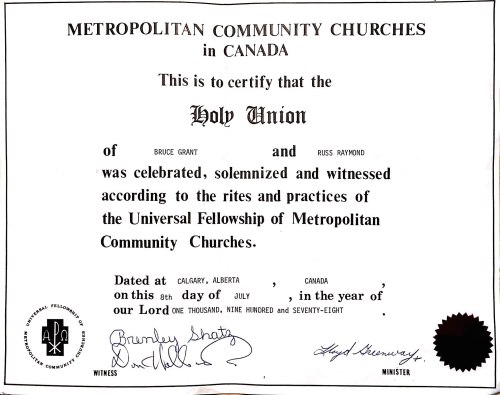 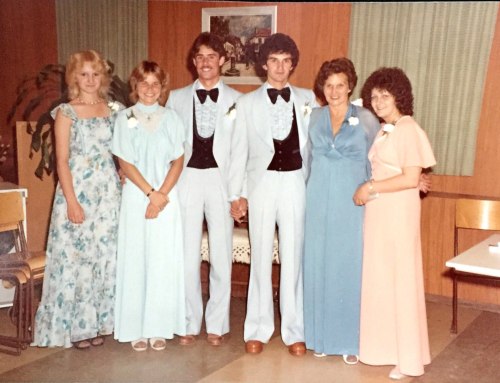 5 responses to “Before Gay Marriage in YYC”