The Club Carousel Cabaret is happening in one week, a collaboration of Third Street Theatre and the Calgary Gay History Project.  If you want to attend this event at the HPR on January 30th, look for tickets: here.  Thank you Lisa at Metro and Brad at Beatroute for the recent media coverage.  We are getting pretty excited!

Club Carousel, is Calgary’s first gay bar, and an important milestone in our community’s history – it is where we collectively declared independence for the first time in Calgary from our culture of homophobia, repression and intimidation.

The story begins in 1967 where an unethical entrepreneur operated a basement gay club but would also sell tickets to straights to come down to “look at the queers.”  The gay community eventually boycotted it and decided to start their own club in the same location: the basement of 1207 1st St. SW.   Volunteers worked hard to clean it and get it ready.  There were some private donors who also helped to get it up and running.  They opened in Spring 1968 as Club Carousel – over time they developed their own theme song and newsletter.

One of the founders, in an interview, said,

“The original name of First Street SW was Scarth Street, but since the name had fallen into relative obscurity and we were attempting to be somewhat discreet, we thought it was a great name to use for our society. The place needed to be totally cleaned up and redone. There was dirt on the floor several inches thick. When we started cleaning it off, we discovered tiles underneath it that we couldn’t even see.

We had a week from the time we acquired the property to our opening night. Everyone involved would come over right after work and spend all night cleaning, painting and building the bar. We hadn’t come up with a name yet. As we were working, we discovered an old can of Carousel brand paint, with a drawing of a carousel horse on the label. And that was it! The Club Carousel was born. Someone painted three similar carousel horses on the wall by the dance floor.” 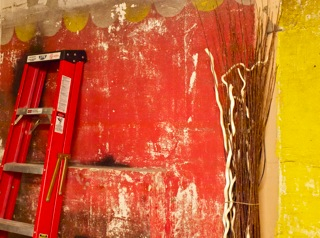 One painted wall from the original Club Carousel survives to this day. Photo credit: Del Rath.

The police came that opening weekend and charged the group for operating without a license.  But one officer told them upon departing to get a good lawyer and dropped the name of Harvey Ghitter.  He arranged for the group to apply for a charter to become a Non-Profit Charitable Society, and eventually the Scarth Street Society was formed and would become a donor to a number of local charities in the 1970s.