Gays and the United Church

In preparation for a presentation at Knox United Church in May, the Calgary Gay History Project dove into learning about the struggles the United Church of Canada had in coming to terms with sexual orientation. The United Church through its history has been a leader in a number of progressive issues, where other Christian denominations have remained resistant to social change. Grappling with homosexuality proved a difficult and divisive challenge for the United Church, and there were several twists and turns in their journey. 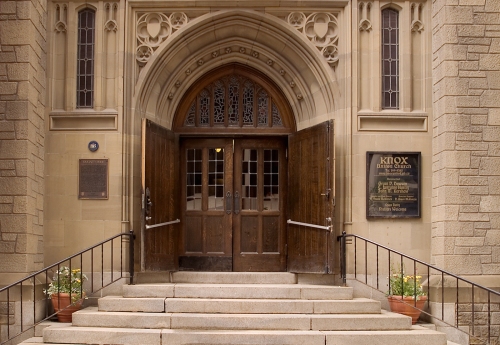 Knox United Church in Calgary Celebrated 10 Years as an Affirming Congregation in May 2017.

One of the first stirrings of the issue happened in 1965 with Pierre Berton’s publication of The Comfortable Pew: A Critical Look at Christianity and the Religious Establishment on the New Age. He brought up the issue of homosexuality and the church, noting the omission of homosexuality from clergy conversation and sermons. He described the homosexual then, as the modern equivalent of the leper. In Calgary, this idea made news when an Anglican Minister, inspired by the book, called for an embrace of homosexuals in his congregation.

It also generated an article that year in the United Church Observer, the Church’s monthly magazine, which stated that homosexuals should be warmly welcomed by congregations and that some same-sex relationships be given a church blessing. The article generated a significant amount of alarm amongst the clergy.

This issue at the United Church simmered in the background for a decade. In the meantime, Canadian society was changing rapidly.  Decriminalization of homosexuality passed in Parliament in 1969. The gay-centred Metropolitan Community Church movement had begun and by 1977 there were congregations in six Canadian cities, including Calgary.

In the late 70s, a United Church task force on human sexuality was commissioned, headed by a Calgarian: Reverend Jim Hillson. Their finding was that “sexual expression is appropriate when it occurs in the context of a loving and committed relationship – for both heterosexuals and homosexuals.” A United Church Observer editorial shot down the finding and promised contention at the General Council – the Church’s highest court. And it was true.

In 1980, the 28th General Council convened in Halifax, Nova Scotia. The report debated at the meeting, In God’s Image… Male and Female was two years in the making. The 103-page document recommended considering the ordination of homosexuals.  It also suggested that sex outside the institution of marriage could be acceptable under certain circumstances.  One delegate called it: “the most dangerous and misleading document to come before the church in my lifetime.” Church headquarters also received hundreds of letters overwhelmingly opposed to the report, yet the majority of the General Council approved it – but only as a study document.

The issue began to polarize the United Church and preoccupy the next few General Councils. Two internal lobbying groups organized: AFFIRM, a newly formed 200-member organization of homosexual congregants and clergy; and the Renewal Fellowship, a 3,000 member grouping of the Church’s conservative wing, founded in 1965, who vociferously argued against the ordination of homosexuals. An informal survey conducted by the Renewal Fellowship in British Columbia showed that 45% of church administrators would leave their church if a homosexual minister was assigned there.

A passionate debate was heard on the issue at the 30th General Council in 1984 held in Morden, Manitoba. There, the recommendation to allow the ordination of “self-declared” homosexuals was overwhelmingly rejected. Ironically, the Church suspected that 10% of its clergy were already homosexual whether or not they were out about it. Consequently, the Council also resolved to begin an extensive 4-year study on “the nature of sexual orientation and practice.”

Interestingly, the homosexual ordination vote failed to satisfy either lobby group. Reverend Morley Clarke, of the Renewal Fellowship, argued that the Council failed to ban homosexual ordination outright, allowing for non-declared homosexuals to serve. He explained: “There is going to be a lot of anger about this issue.  The church at the grassroots has spoken unequivocally on this issue. They have done everything in their power to say ‘no.'” Meanwhile, Reverend Eilert Frerichs, spokesman for AFFIRM and disappointed in the decision, called it a stalemate rather than a setback.  He said: “The decision closed the door to any potential witchhunts, and we were terrified that might happen.”

On March 4th, 1988 the United Church of Canada’s four-year study on “the nature of sexual orientation and practice” was complete. The 13-member research committee released an 118-page report called: Toward a Christian Understanding of Sexual Orientations, Lifestyle and Ministry. Its key recommendation: sexual orientation should not be a barrier to participation in any aspect of church life. A dramatic backdrop for this report was ever increasing AIDS-related deaths in Canada. The plague had been spreading exponentially in the 1980s, particularly in Canada’s largest cities.

A new grassroots lobby group sprang up called the Community of Concern to fight the report’s recommendations. In Calgary, like other parts of Canada, church leaders gathered to debate and discuss. On March 29th, 1988, at St. Matthew’s United Church in Calgary, Reverend David Cook moderated a meeting in reaction to the report in advance of the church’s Alberta and North West Conference.

The mood was mostly contrarian. At both the Calgary gathering, and then at the regional meeting in Camrose that May, petitions were brought forward rejecting the report and voicing strident opposition. In particular, the Alberta and North West Conference was concerned about individuals and families who were considering leaving the church if the report was accepted. By the time of the 32nd General Council meeting in Victoria in August 1988, the Church had received 1,813 petitions from across Canada rejecting the report.

In advance of the General Council, a special committee of 24 members was convened to digest the report and make recommendations. Marion Best, who chaired the committee recalled in an Xtra.ca interview that when they began there were only two members who supported the report, and five opposed: the rest were open to listening. On day two of the deliberations, the committee members arrived at the classroom they were meeting in and found homophobic slurs written all over the blackboard. Best described that moment as a critical turning point; after six days of grueling debate and soul searching the members decided to recommend the report unanimously.

That unanimous decision was a powerful symbol at the General Council itself.  Yet for nine days at the University of Victoria, delegates lobbied and debated the divisive report. The culmination was a seven-hour session ending at 1 a.m. on August 24th, when the final vote happened. The 388 delegates voted 2:1 in favour of any worshippers – including self-declared homosexuals – to become full members of the church, which also meant that gays would be eligible for the ministry. 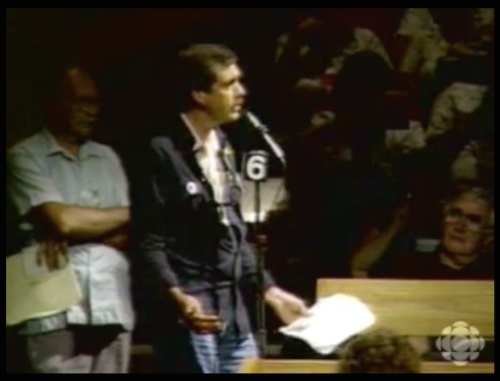 There was fallout. In September 1988, Lethbridge First United Church, at a congressional meeting, voted 4:1 to break away from the United Church due to the General Council decision.  Reverend Stan Errett, Minister of St. David’s United and chair of the Calgary Presbytery, said: “I don’t think it is going to have any impact on us; we’re in relatively good shape. There’s lots of distress and lots of concern, but people [in Calgary] are not about to run away.”

Calgary’s Hillhurst United Church was not pleased with the decision.  Their Reverend Robert Nagus said: “It’s wrong. It’s an error in judgment. It’s an attempt to sanctify sin. But the way to fight this thing is to stay within the church, get a referendum and change the policy.”

One hour north of Calgary, the Cremona United Church draped its signpost in sackcloth and ashes as a symbol of mourning. In Blackfalds, near Red Deer, United Church members erected a large sign on the church grounds reading: “THIS CHURCH IS OPPOSED TO ORDAINING HOMOSEXUALS.”

Dissent was increasing all across the country, led predominantly by the Community of Concern movement. Calgary started its own chapter of the anti-gay lobby group in October. By November, Hillhurst United, had publicly declared it was withholding funds to the national church and encouraged other congregations to join them. Later that month, three other churches: Forest Lawn, Southminster, and Southwood United had filed their opposition to the national executive regarding homosexual ordination.

As the heat spread, the United Church General Council Executive met for five days at the end of November in Toronto to decide how to move forward. The emergency meeting was precipitated by demands for a binding referendum on the issue by 1,000 Community of Concern members, who assembled in Etobicoke. They told the Executive: “We’re in for the long haul.”

The Executive declined to put the issue to a grassroots vote, as many wanted, but did reopen the issue asking congregations to discuss it among themselves, and in their regional conference, to bring their concerns to the 1990 General Council meeting, where policy could be changed.

Their willingness to entertain a reversal on gay ordination greatly reduced the turmoil and inflammation in the United Church community. Reverend Errett said: “I think it’s a good consultative process. From now on we’re going to take seriously what the congregations are saying. I think it will avert what people fear is a national denomination splitting down the middle and people going in all different directions.”

Madeline Wood, Chair of the Calgary Community of Concern chapter, conceded that the new move was “somewhat reasonable,” although she worried that the General Council commissioners could ignore the will of concerned congregations a second time.

Wood’s worries were prescient. At the 1990 General Council held in London, Ontario, the issue was debated and again came to a vote. This time, the result was 4:1 in favour of gay ordination, reaffirming the 1988 decision, and clearly foreshadowing the trajectory of the debate. Despite traditionalists fomenting fears of a new exodus from the church, the large split never took place. In the end, the estimate of those who left was about 25,000 people, around 3% of the United Church’s constituency.