The Golden Age of Gay Bars in YYC

Posted on September 22, 2017 by calgarygayhistory | 7 Comments

Calgary was booming in the 70s. The city’s population increased about 50% in those 10 years. Club Carousel, the only gay club at the beginning of the decade saw its popularity wane as commercial gay bars opened in the city. The owners and operators had more capital to invest in their emerging discotheques, and the growing gay community flocked to them.

The Parkside Continental ran from 1973-1986 and was located at the corner of 13th Avenue and 4th Street SW (where Shelf Life Books is currently). The Parkside was named after a famous gay tavern in Toronto. Vance Campbell, a businessman and gay bar owner from Vancouver moved to Calgary to start the Parkside with local partners.

In the early years, there were provincial regulations about food being served with alcohol at bars. Rudy Labuhn, who was initially a DJ at the club and then manager, remembered that when the Parkside began they served 50 cent burgers to all drinkers.  He explained that the Province also limited the amount of recorded music that could be played. Fortunately, a straight bar called Lucifer challenged those rules successfully ushering in the age of disco to Calgary. Interestingly, the bar would end most nights with a song that was decidedly more downtempo: Broadway singer Maureen McGovern’s song, “The Continental.”

A grainy image of Vance Campbell in front of the Parkside Continental from the Body Politic, Sept. 1980.

The Parkside expanded upstairs creating a second bar called The Green Room. The Imperial Sovereign Court of the Chinook Arch in April 1976 was founded there; their first coronation followed in January 1977 at the Holiday Inn Downtown. Drag legend, Sandy St. Peters who grew up in Calgary and lived and performed across Canada, entertained occasionally at the Parkside. After a big Saturday night at the bar, she would run across the street to campily welcome churchgoers arriving Sunday morning for early service at the First Baptist Church. In addition to drag performances, Eartha Kitt famously did a highly regarded concert one night in the Green Room.

Vance Campbell proved to be a divisive figure at times publicly opposing the local gay activist community, which revolved around Gay Information & Resources Calgary (GIRC), headquartered only one block away. He was described by the Body Politic in 1980 as one of the power brokers in the gay community “confident enough of his position to write to the mayor and counter GIRC’s claim that Calgary could face a gay rights march.”

Another reason perhaps why Campbell felt powerful was he was an owner of Calgary’s other gay bar of note: Myrt’s.  Opened in 1976, the sign on the building said Myrt’s Beauty Parlour and was located at 808 9 Ave. SW (now a parking lot). This gay lounge and disco were initially open Friday and Saturday nights for men only. As its popularity grew, it operated six nights/week and became a mixed club, reportedly played the best music in the city. 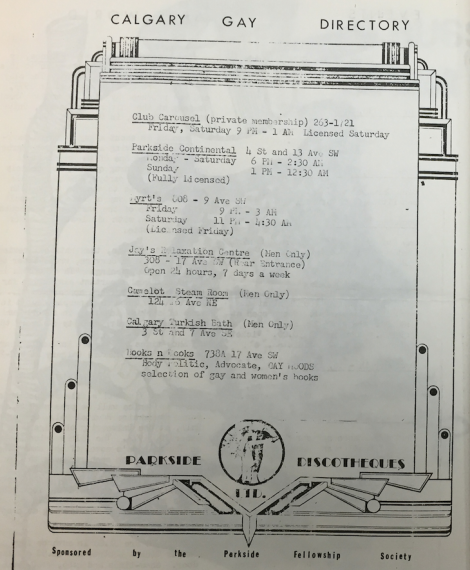 A hallway off the dance floor led to a 150-seat theatre known as the “Backlot” which also served as an after-hours bar. The gay community was encouraged to use it as much as possible; it was the venue for emerging theatre artists, Imperial Court drag shows, Mr Butch Calgary “Slave Auctions” and, on Sunday mornings, Metropolitan Community Church services. Myrts’ final song every night was Kermit the Frog’s “Rainbow Connection.” 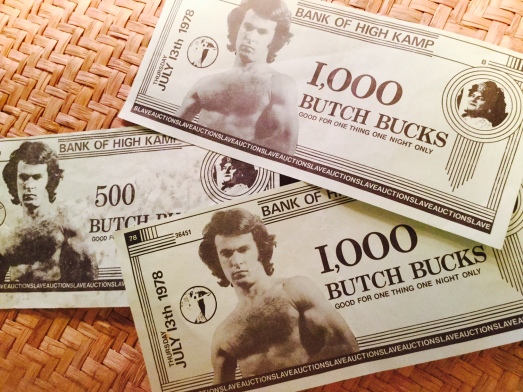 Butch Bucks from a Calgary Slave Auction in 1978. Donated to the YYC Gay Archives by Terry MacKenzie.

The bar closed on New Year’s Eve 1981/1982 as the building fell victim to boomtown redevelopment. Myrt’s and the Backlot briefly moved to 17th avenue before it closed again. One former patron broke into the site and retrieved the neon “Backlot” sign. The preserved sign now hangs over the door of the contemporary Backlot bar on 10th Ave. SW.

7 responses to “The Golden Age of Gay Bars in YYC”