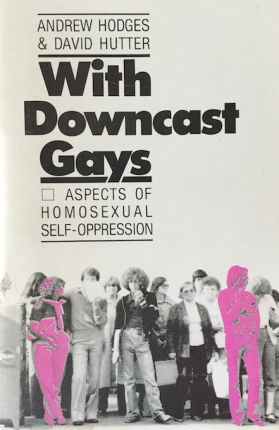 Last week I read the gay liberation manifesto, With Downcast Gays: Aspects of Homosexual Self-Oppression, by Andrew Hodges and David Hutter, and was inspired.  You can read it online: here.

The slim 1974 treatise, first published in London, England, was reprinted multiple times in many countries.  Pink Triangle Press, publisher of the Canada’s gay liberation newspaper, The Body Politic, produced the first North American edition in 1977, selling out its 6000 copies in less than two years.  A second edition was printed in 1979.

With Downcast Gays is a clearly articulated call to action to gays everywhere: you must fight for your pride and self-respect.  Self-disclosure (coming out), the authors explain, is essential in overcoming self-oppression.  This message found an eager audience in its readers and paved the way for the outing movement and debate over its practice in the 1980s.

The authors make an example of the famous novelist and social commentator, E. M. Forster, whose gay novel Maurice (written in 1914) was only published posthumously in 1971.   They write:

The novel which could have helped us find courage and self-esteem he only allowed to be published after his death, thereby confirming belief in the secret and disgraceful nature of homosexuality.  What other minority is so sunk in shame and self-oppression as to be proud of a traitor?

At times angry and at times thoughtful, With Downcast Gays, has relevance in today’s world still.  Despite a large queer community in Calgary, with very public equal rights, some people still self-censor their identity for the sake of psychological comfort.

Postscript: In 1992, Author Andrew Hodges wrote another book, about Alan Turing, that became the basis for the 2015 Academy Award winning film: The Imitation Game.

2 responses to “Downcast Gays in YYC?”